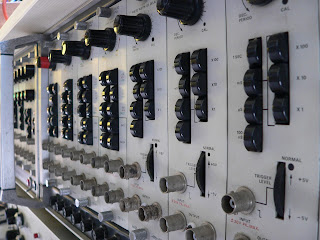 Here's a little information on the modules available for the wonderful Gould Advance PG52B Modular Pulse Generator. At the bottom of the page is a scan of the system manual

P1 or P1A Clock Generator
This module provides the basic clock rates for the system. It covers the frequency range 0.1Hz to 30MHz in free-running, externally triggered or gated modes. The trigger mode may also be triggered manually for single shot applications, or used as an aperiodic ÷10 or ÷100 count-down. A sweep facility alternatively allows the internal frequency to be controlled over any selected 10:1 range by an external input.

P2 or P2A Pulse Width or Delay Generator
This module is a variable pulse width generator, typically driven from a clock generator to determine the width of an output pulse or interposed between the clock generator and another PWD generator, to provide a delay between the clock and output pulses. It covers the range 25nS to 1Sec and while it is intended to be driven from a clock or any other system interface signal, the input trigger level can be varied to suit direct operation from other signal sources.

P3 or P3A Standard Output Module
This module provides outputs into 50Ω with rise and fall times typically 5nS. The positive and negative levels of the output pulse may be varied independently over the range 0 to +10V and 0 to -10V respectively. (i.e. 20V peak to peak). Attenuated ranges allow those levels to be reduced successively from 10V to l00mV. A pulse invert facility allows both the generation of negative pulses and output duty cycles approaching 100%. The two input sockets allow the generation of output pulses from two independent sources.

P4 or P4A Variable Slope Output Unit
In addition to the independent 0 to +10V and 0 to -10V output level controls of the P3 module, this module has rise and fall rates adjustable from 1nS/V to l00mS/V with independent 10:1 controls for the positive and negative going edges. 20V signals can be generated into 5OΩ with any slope from a 2 second ramp to a 20nS rise time. Its dual input and invert facilities are similar to the P3.

P5 Passive Summing Unit
This module contains two independent resistive networks, one with two inputs and the other with three inputs which allow the analogue summation of pulses of different shape, amplitude or offset, but with some attenuation. Being a purely passive unit, it may either be used mounted in the case, or used externally if more convenient. It consists of two 50Ω resistive networks, enabling either two or three output pulses to be added together for waveform synthesis. The unit is intended for summing the outputs of the P3 module, but other signal sources may be used, for example, sinusoidal voltages or further DC offset.

P6 Power Output Module (no image)
This module provides positive or negative voltage outputs of up to 50V into 50Ω. It has an unlimited duty cycle giving a maximum output power of 50W. It contains its own power supplies driven directly through the main frame from the incoming AC supply. It has dual input and invert facilities similar to the P3 module.

P7 Fast Output Module (no image)
This module provides simultaneous positive end negative output pulses of up to 5V into 50Ω with rise times of 1nS. A variable delayed start facility allows the generation of output pulse widths down to 10nS despite the minimum pulse width capability of 25nS of the P2 module. It also has a dual input facility.

P8 Word Generator
This module generates pulse patterns of up to 16 bits in length and can operate in a continuous or externally triggered cycle mode. The output can be switched to be in a non-return-to-zero form or, via a P2 module, in a return-to-zero form. A synchronising output signal is provided at the end of the word to allow modules to be encoded to extend the word length beyond 16 bits.

P9 Gate Module (no image)
This module contains two independent four input OR gates with the facility to invert any input or output. This flexibility allows the simulation of pulse addition, pulse blanking, set/reset bistables etc. and is invaluable in the build-up of complex pulse
waveforms.

P10 Trigger Module
This multi purpose module provides more flexible facilities for triggering the system from external signals or from the internal 50Hz supply frequency. It has a slope and level selection control with a sensitivity of 500mV. In addition to the normal interface signal output it has an independent pre-pulse output of 1V into 50Ω and width variable from 25 to 200nS. A further ÷2 aperiodic count-down allows the generation of a 1:1 square wave at any frequency.

P12 Modulated Width or Delay Module
This module is similar to the P2A module but in place of the variable trigger lever facility, it allows an externally applied voltage to control the output pulse width over a 10:1 range, over-riding the function of the fine period controls.

P13 Modulated Output Module
This module is similar to the P3A module, but with only one pulse input facility. An externally applied signal can be switched to control the positive output level from 0 to +10V, or the negative level from 0 to -10V, or both, over-riding the function of the appropriate level controls.