I've been building this thing since the late 1990's. It started off as a boutique set of filters to augment my existing collection of synths and test equipment, then it grew...   ...The synths were replaced one by one as they pretty much became obsolete in the grand scheme of things, then the drum machines left one by one. Much of the test equipment however, remains. Someone somewhere referred to these things as a spiritual ham radio - they're exactly right. MOTM kits form the basis of the system with a good sprinkling of Oakley and CGS designs behind the silver DIY panels. In the last few years I've added further modules from Ian Barton, Nonlinearcircuits, Stroh/J3RK, MFOS, Ian Fritz, Hexinverter, and Yusynth to name but a few. The system is neither East Coast (Skegness), nor West Coast (Blackpool) - it sits somewhere rather conveniently in between: Sheffield

Here are the scores on the doors as of May 2018:
Number of Modules - 203
Number of Cases - 23
Number of Connections - 1544
Number of Controls - 991
Number of LEDs - 209
Control Surface Area - 2.96 square metres
Total Power Consumption - probably best left unknown
Number of Protective Cats - Just one but she's stroppy 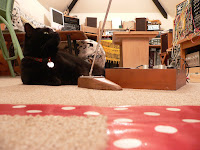